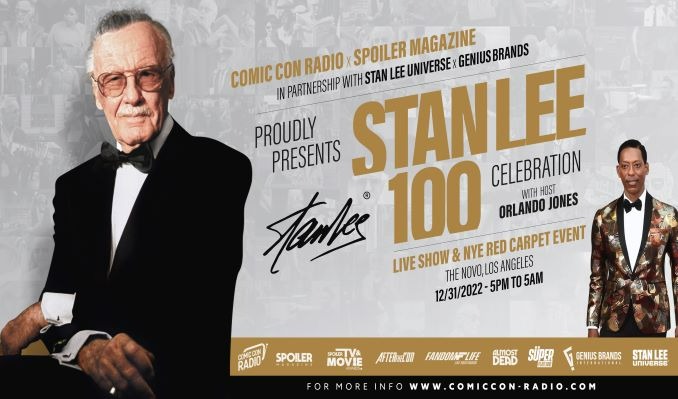 In partnership with Stan Lee Universe, a joint venture between Genius Brands International and POW! Entertainment, Comic Con Radio and Spoiler Magazine are proud to announce The Stan Lee 100 New Year’s Eve Red Carpet Celebration. This will be Hollywood’s hottest ticket and remembered in history as one of entertainment’s biggest nights.

Stan Lee, a legendary content creator, the world’s most famous comic book creator, and considered to be the “Godfather of Marvel Comics,” is a global icon whose inspirational messages of hope, diversity and inclusivity resonate globally today. Stan Lee was the co-creator of many of the most successful characters ever made, including The Avengers, Spiderman, Iron Man, Black Panther, The Incredible Hulk, X Men, Thor, Captain America, Ms. Marvel, Silver Surfer, Antman, Nick Fury, Guardians of the Galaxy, and numerous more!

“As we all know, Stan was a force to be reckoned with…a creative genius who gave the world some of the most globally-renowned and successful characters and entertainment of all-time,” states Andy Heyward, Chairman & CEO of Genius Brands International. “We are privileged to bring this centennial celebration, one of many initiatives in the works, to honor the man who left an everlasting legacy.”

“Stan always pushed the boundaries of art and entertainment, and he challenged competitors and contemporaries around him to do the same, becoming a household name in the process,” says Gill Champion, President, POW! Entertainment. “We’re thrilled to be able to celebrate his 100th birthday in a larger-than-life way that honors the scope of his work and legacy.”

“It’s an absolute honor to be able to commemorate Stan Lee’s 100th birthday alongside his peers and fans right in the heart of the entertainment capital of the world, Los Angeles,” says Galaxy of Comic Con Radio and Spoiler Magazine.

More details including celebrity guests, performances, VIP ticket information, and run of show will be announced over the coming weeks. In the meantime, please visit comiccon-radio.com.

Comic Con Radio is the premiere sci-fi, fantasy, horror, and pop culture entertainment network. With thousands of celebrity interviews over the past 15 years, Comic Con Radio has become a mainstay in the fandom world. Covering genre entertainment in all its forms: Movies, TV, books, comics, games and more, establishing a reliable network for fans to feed their daily pop culture cravings. Our shows have given an outlet for both big stars and up-and-coming talents, showcasing the wide world of the entertainment industry.

SPOILER Magazine is the premiere pop culture entertainment magazine covering genre entertainment in all its forms. In only four years, SPO!LER Magazine has become a reliable hub for the worlds of TV, Film, and Comics, connecting fans with their fandoms through interviews, reviews, and high-quality features with fresh perspectives by writers who are as enthusiastic about this universe as the fans who read it. Through our explosive and delicious designs by graphic artists from all over the world and an array of topics covering both the big and the small in our universe, our numbers are growing each and every month as we make our way towards becoming the number one fandom magazine in the world. Not only do our issues look great on the coffee table, but our incredibly knowledgeable and talented staff write about their own widespread fandoms and interests, bringing a personal touch and fresh analysis to the content they provide.

Stan Lee Universe is Genius Brands International’s controlled venture with POW! Entertainment to manage the name, physical likeness, physical signature, live-action and animated motion picture, television, online, digital, publishing, comic book, merchandising and licensing rights for Stan Lee. Stan Lee Universe includes the Stan Lee Celebrity Brand, as well as the creation of new content from Stan Lee’s portfolio of approximately 150 unmined ideas and character creations in his post-Marvel career, along with consumer products programs to be developed for these new projects. Recently, Genius Brands concluded a 20-year deal to license the name and likeness of Stan Lee to Marvel Studios for future feature films and television productions, as well as use in Disney theme parks and experiences worldwide.

Read More
*Service and handling fees are added to the price of each ticket.